She started tailoring in 2012, as a substitute for University education, which she couldn’t afford, shortly after graduating from Secondary school.

Esther meant to study Mass Communication, and grow to be like her broadcast role models – Eugenia Ahbu, Orprah Winfrey and the likes, but lacked sponsorship.

“I had no money to further my education; and my parents could not afford it either,” said Esther, an indigene of Bassa Local Government Area in Plateau State.

She had started learning tailoring since 2006, as a little girl in Junior Secondary School (JSS2). She took weekends, holidays and class-free hours to learn the trade under an already successful tailor. Many others that enrolled for the training along with her graduated, but her occasional appearance at the centre prolonged her stay.

Esther started her own workshop on March 15, 2012 after completing her apprenticeship and certified fit for autonomy. At that time, she had but one sewing machine, which she bought from a N200 daily saving she’d made.

“I only had one sewing machine and no capacity to hire staff. I managed to rent a small room that could carry just two sewing machines from my old savings and barely made up to five dresses a week,” she said.

Eight years down the line, Esther has acquired nearly a dozen extra sewing nachines, occupying about the biggest fashion store in the Plateau State capital. 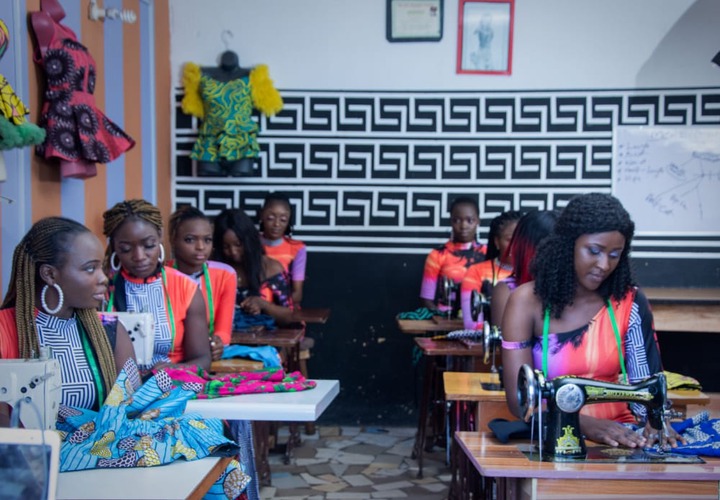 From less than five wears a week, Esther now churns out 40-50 dresses a week, with incredible customer ratings.

She currently employs about a dozen young girls and has over 30 apprentices who are given full autonomy within six to 18 months.

Among her past trainees are University graduates who are doing incredibly well in different parts of Nigeria.

Once a while, Esther searches and trains poor teenage girls to be financially independent and safe from “opportunists”.

“I don’t want anyone to take advantage of them because they are poor and idle, so I look for them and encourage them to learn the trade,” she said.

Esther looks forward to establishing a multimillion dollar fashion “planet” with different departments, “to help the society and change Nigeria’s image outside,” she said.

She has applied for admission in a Nigerian University to still pursue her dreams in Mass Communication, but this would only be to promote her own products, likely in an independent TV show.

“I am not looking to take up any employment. What I make from my business is enough to have me relax and only think of expanding,” said Esther.

Young girls idling and only relying on men for survival, Esther advises, should find a trade and “break free” like she did.

No administration can survive without tourism in Plateau – Sunday Biggs