Isaac shows off strawberries from his farm

Mr. Dalyop Isaac Gyang, 40, is the current Councilor representing Vwang Ward in Jos South Local Government Legislative Council in Plateau State. However, not a quarter of his annual income comes from politics.

From age 7, Isaac started learning how to farm. His father, a renowned vegetable farmer cultivated in him, a spirit of resilience, hardwork and passion, and that eventually paid off.

Starting farming as an individual, with specific focus on strawberries, from Primary 6, Isaac soon realized that more could be made from farming than any paid job. 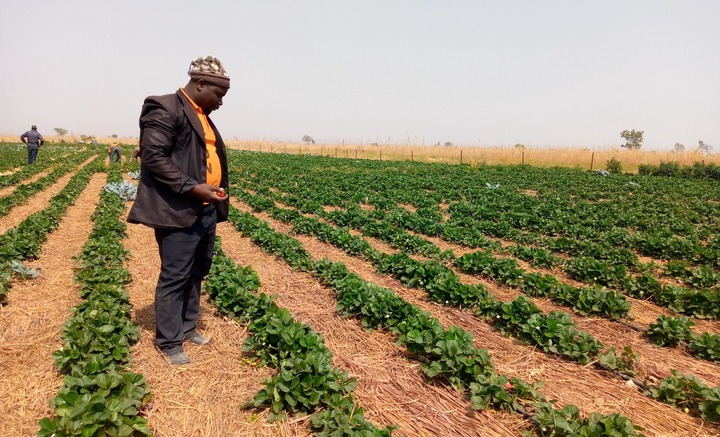 The strawberry farm alone, which covers 2.7hectares of land churns out tonnes of fruits, almost all year, within three months of planting.

According to company records, his annual earning from strawberry farming is almost the monthly salary of 50 lawmakers in a North Central State House of Assembly.

Other crops cultivated by him are broccoli, cabbage, pepper, tomatoes and carrots among others. All these he farms yearly and earns substantially from them.

In an exclusive interview, Isaac reveals he has never taken a bank loan, and doesn’t need such. He further explained that no job offer would take him out of farming. When asked why he is into politics, he said, “it’s just to fight and provide opportunities for my people.”

Armed men believed to be herders once attacked him on his farm, tearing almost every vein in his head with machetes and left for dead.

When he recovered after months of treatment, he relocated the farm and has been active in advocating for good governance, peace and security in his community.

He is currently the Chairman of the Farmers Association in Jos South LGA and is trusted to lead in any capacity, even though he personally doesn’t feel attracted to active politics.

Isaac is currently searching for partners, those interested in processing and/or storage to set up a factory. His is perhaps the most lucrative business in the State, but it is not clear if the State Government is aware of it.

The State currently has one world-class agricultural institute in each of its three Senatorial zones but their collective annual output is rarely up to half of his in a month.

Partnering with him to start processing, storage and export would perhaps transform the State from its current civil service status to an industrial and self-sufficient State.